Conferences are made of connections, gatherings, new acquaintances. The BrazTESOL International Conference in João Pessoa was no different, except that it was totally different for me. The premises of the Bilingual School Cidade Viva were amazing, with great infrastructure for an international event. The people working there had a special vibe, very solicitous always, and smiley. It was clear that they were not merely employees, but felt part of a community. The theme of the conference didn’t say much until I heard all the inspiring plenary sessions (though I still have some remarks about them, but this will be in another post!) and made sense of such a personal, touching issue, Emerging Identities in ELT.  From JJWilson’s invitation for self-reflection to Ben Goldstein’s analysis of emerging types of digital discourses, it became clear to me how we, teachers, might have so many inner struggles in our search for our own identities in another language, which became ours.

In our own culture, we build our identities from birth in a social-cultural context that was imposed to us, and we adapt. As for our identities as teachers and language learners, we can build them with more choices, our own choices of where we want to work, what we want to do and be, what our main values and principles are. It is not a conscious process, but once you get hold of it, a transformative process takes place, as you realize how fragile our own learners are in trying to find their own identities in another language. I will never forget, for example, a day when I was living in Key West. I was in a bar with friends and was just laughing and telling stories in English. I had had only a bottle of beer, so it wouldn’t really justify my cheerfulness, but my new hispanic friends were in awe to see how “talkative” I was. Talkative? I’ve always been talkative. They mentioned it was the beer, for I was generally shy and introverted. For the ones who know me, you might be laughing at this point. Introverted, me? They insisted it was the beer, and I tried to explain that I was just being me, but then I realized that my identity in Spanish was really what they mentioned, for I felt really ashamed to speak in my terrible “portunhol”. In English, I felt at home. In Spanish, I was submersed in shame…

For lg learners it is not just about being fluent or accurate, they need to own the lg Ben Goldstein #14btic #braztesol2014 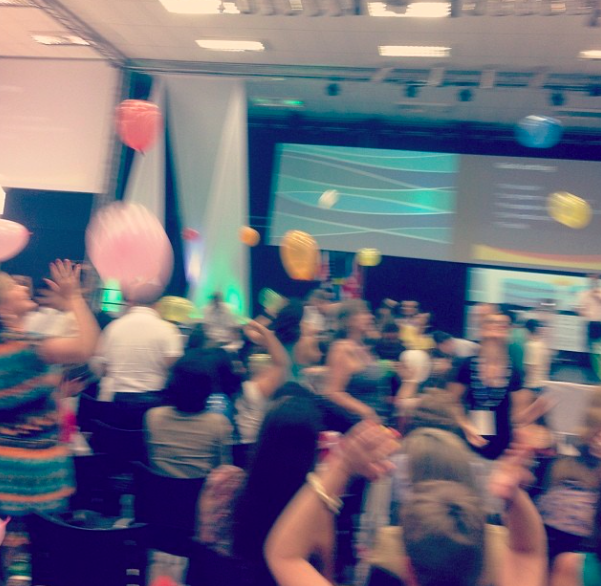 Then, if you, as a teacher, start to understand the meanders and struggles your students have to create their own sense of self in another language, you are up to something big. You are up to a kind of connection with your learners that will help them open up to language learning in a more vibrant, comfortable, relaxed way. Magic is bound to happen, then. Deep down, I’ve always had this feeling and this willingness to connect to my students, but consciously understanding and working on this sense of emerging identities can be a very powerful tool for a connected learning/teaching process. Besides, having had the chance to attend Valéria Benévolo’s presentation on seeing the other through a different angle and lens together with Guilherme Pacheco’s invitation to reflect upon student-teacher relationships, I feel that I have even more tools and strategies to make a difference in my students’ lives and their pursue to develop their identities and voices in the foreign land of language learning.

I’ll stop here with Luiz Otávio de Barros’s thoughts in his opening plenary where he led us through the importance of listening and having different ears for diverse types of listening:

“Listen to understand before you listen to react” @luizotaviobarros #14btic

My points of reflection that might help you identify your students’ emerging identities in EFL:

– How much do you know about your students’ backgrounds, interest in learning English?
– How much do you know about their past experiences with language learning?
– How much space do you give for helping students talk about things that are REALLY relevant to them (not what is in the textbook)?
– How much support have you given for your students to express who they REALLY are in the classroom?
– To what extent have you created opportunities to bring your students’ uniqueness into your classroom? Are they reproducing language that is just part of a distant reality or are you bringing their souls and lives to class?

The BRAZTESOL Conference has been an eye-opener, giving me a more reflective perspective to the kind of support my learners need to thrive as human beings and learners. We need to be prepared to embrace emergence in the classroom as part of the emotional process of flourishing and becoming in a foreign language.